One of the topics of discussion with friend E was about giving in abundance. She wrote about the importance of seeing the motivation behind others. I quote from her email: Is it to make ourselves feel good? Am I focused on helping others to distract myself from my own problems?

Honestly sometimes I am guilty of that. Humans apparently have a threshold for giving, based on personal experience. Once past that limit, the motivation behind the act of giving becomes lost. There were times I got tired when I just wanted the activity to be over and done with and I became guilty and angry with myself for being self-centered and selfish.

I didn’t realise I was tired. That’s not an excuse. But rather that’s why I realised I had to stop. The act of giving which was supposed to be initiated by abundance has instead become an infliction of guilt. It felt far better to do nothing than to receive a negative feeling in return.

Hence for the first three months of this year, I tried to give more time to myself to recover my equilibrium and be more myself. Tougher than I thought but I am still trying.

Remember how I started on baking last year? The time I spent to build my patience and soothe myself brought my skills to a new level. Never in my life have I ever thought I would be good at baking. When I first baked at 13, I remembered I was rather enthralled but I never got a chance to explore further due to a equipment deficiency at home. That was that.

Fast forward to more than a decade, chocolate cake, apple cake, lemon cake, poppy seed cake, carrot cake, chocolate hazelnut torte, cookies, orange brownies, vanilla chiffon cake – I have acquired a new gift for sharing. Not a huge fan of cakes and cookies, the joy during the process of creation and distribution of outputs far surpassed anything else. Although I used to despair during chemistry practical lessons when I screw up my indicator values due to my impatience, baking – I realised does not require precision. There is a general concept behind it and being able to grasp that element enables one to produce(or even save) delicious pastries.

Not only that, I have influenced two persons to start on baking. My flatmate A who can now bake a decent lemon apple cake has recently acquired icing writing from me. After numerous occasions of witnessing me in the kitchen, she finally returned from one of her holidays back home with one cake under her belt. Last Sunday, I baked my first brownie and finally had my friend M kickstart her first baking attempt. I conclude that she has much more patience than me and is more thorough and will soon surpass me in time to come. When I saw her delight and how she enjoyed the fruits of her labour, I was certain another baker was already in the making. Recalling the numerous times when I attempted to explain how simple it was to bake a cake and she would be able to do it, she had looked at me disbelievingly and brushed off my comments.

By passing on the gift of making, I had given love in abundance because I wanted to share the colour it had brought into my life.

Chocolate Hazelnut Torte without a blender – a mix of brownie, Ferraro Roche and chocolate.

Lemon Apple cake by A and a combined icing effort. 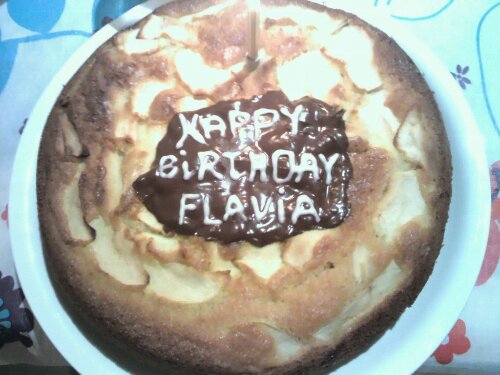 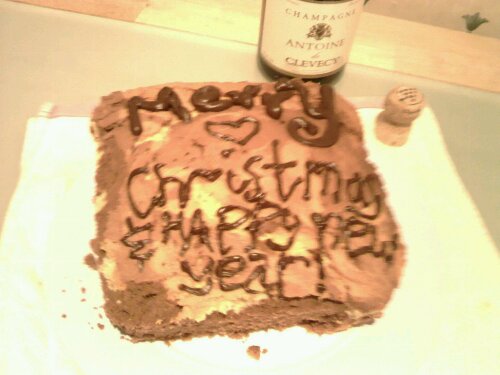 After baking around 20 cakes in the second half of last year, I was wondering if I should continue baking. I was getting a little tired of the rapid intensive production and my interest was waning. I am not even fond of cakes but rather just the creation process. The idea of learning the basics and ability to put in raw ingredients to produce something edible and also the skills of amending and “saving” the cake when things goes awry makes me happy. Problem solving is the word I was looking for.

Without a structural syllabus, my baking learning process seems to have come to a standstill. Shall I continue baking in 2013? I asked myself. Apparently I have not stopped yet. I have grown tired of the old cakes I have baked but the “new receipes” needs more effort as I have not mastered them yet. Hence I have struggled with this dilemma for the last two months.

However, there was a push factor for Christmas to bake a cake – an activity with a friend and also to celebrate the spirit of giving. So we did bake a marble cake – which my friend C did most of the mixing while I supervised her. Nonetheless she tutored me to create icing on the cake – writing with chocolate icing as you can see from the picture above. It kept the baking fire going. My cakes which I baked specially for friends’ birthdays and parties – the only reason why I even baked in the first place-will be a much improved version than before! How exciting!

Baking comes from the heart and producing something with your hands shows the sincerity in giving – that’s how I feel. And the activity of baking calms me and the product makes people around me happy – the way I see it, I am spreading happiness around.

The first cake of the year – the new receipe – is the apple cake. It looks not that fantastic but the white icing which I wrote the three lines of well-wishes – indicating “Happy Birthday”, “Good Health”, “Happiness Everyday” – not only made my friend M happy but also myself as I was pleased that somehow, things have moved up a notch unknowingly.

Another great start to the year. Happy New Year everyone!

How many visits to date?

What is my favourite topic?

Search for An Art